Regular blog readers may recall my impulse purchase a few months ago of some Pebeo Fantasy paints and the first experiments I made.  I realised after I had researched them that they would be brilliant for jewellery making so I ordered myself a few bezels.  Well they arrived from China a few weeks ago and I made them all up in one night’s 10 minute play. (Later another 5 mins play too!).

The important part of these paints is not to fall in love with the pendant too quickly as they change and evolve as they set.

First few drops of paint have gone in. 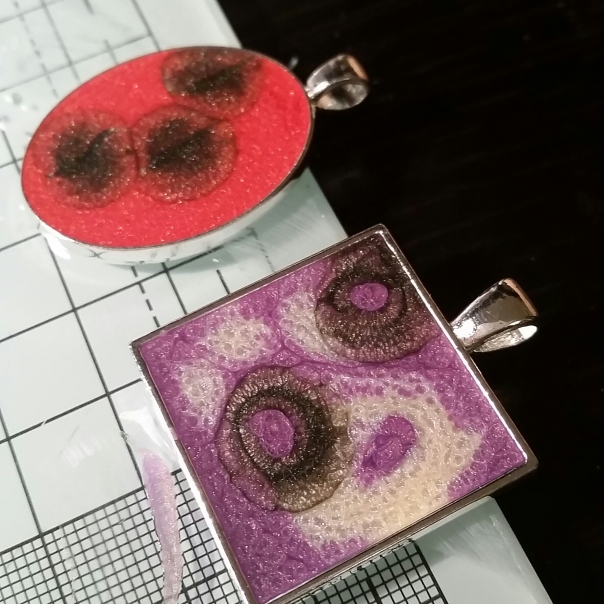 About 5 mins later this is how the two big ones looked.  These were done solely with the Prisme paint.  This shouldn’t be mixed with the moon if you want the honeycomb effect as the moon takes over. 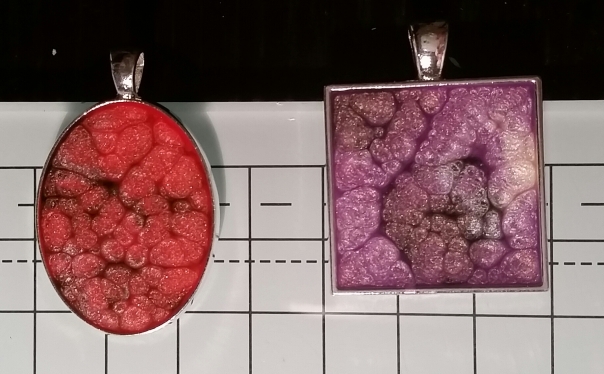 10 mins later this is how they look.

I also had four small bevels.

These are mainly made with the moon paints the third from right is only Prisme.  These were when i had started.  Again these have changed a bit but not as much as the larger ones.

And there is a definite change more with the Prisme than the moon but the lovely effects and the way the paints swirl is beautiful.

Ok so about an hour later I popped back in for another look and wowser those Prisme have really done their thing by this point! 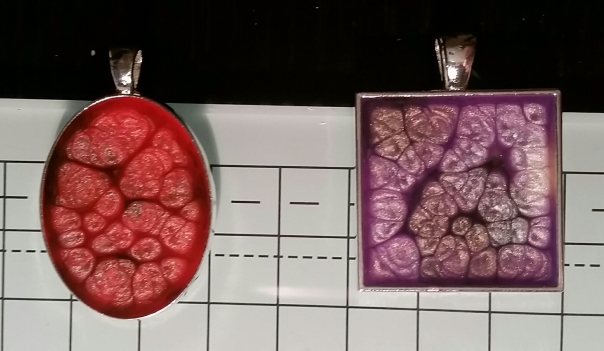 It’s so tempting to keep popping to see the projects developing but after a couple of hours they do stop changing so I knew to just leave them be to dry!

But I couldn’t! An hour later I was back having another look and wondering what would happen if I added a bit more paint! 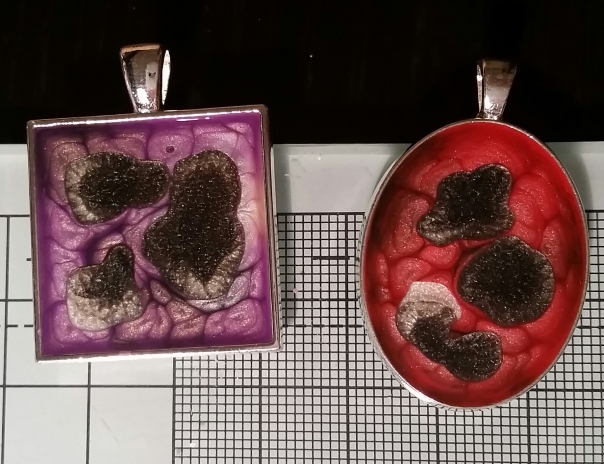 On the larger two pendants the drops of paint immediately started sinking into the rest of the paint and reacting. However there was a lot more paint in these pendants and it wasn’t close to being set. As I hadn’t introduced a new colour I knew that these would look as fabulous regardless once they started to react.

This Moon based pendant I added some of the coral and the navy but these were very shallow bezels and I think the first layer was set so they sat on the top of the first layer rather than amalgamating. But still could be interesting. I did keep this as a moon only paint still. 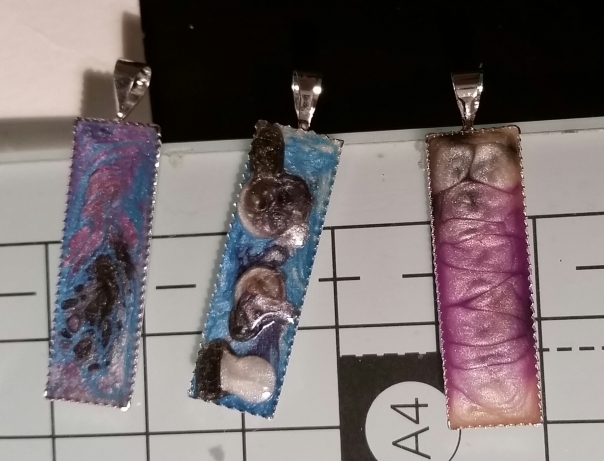 The pendant on the left was moon and Prisme mixed and I wanted to keep it as it was as I liked the colours. The one on the right I loved so much as it was I didn’t want to mess it up so left it as it was. The one in the middle had been moon only so I decided to try Prisme on this as the bottom layer seemed set so wondered if it would remain on the top and still do the Prisme effect or sink and blend. The agonising part of this experiment was leaving the pendants and going to bed.

The next day here is how they looked… 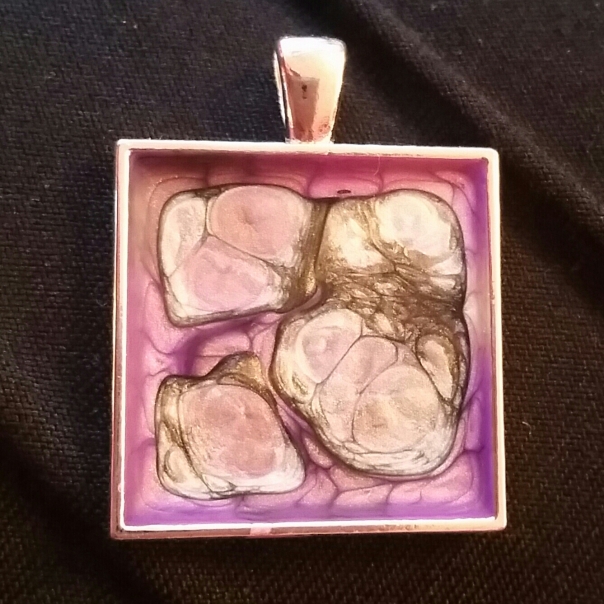 Absolutely adore this one! It was still a little tacky to touch but I was dying to try it on… so here is a less than flattering pic of me with the pendant on!

Well done you’ve got past that ugly mug… now for the rest of the pendants.

The red one is nice too but I felt it needed something more. More about that later.

The two small ones were not as successful… 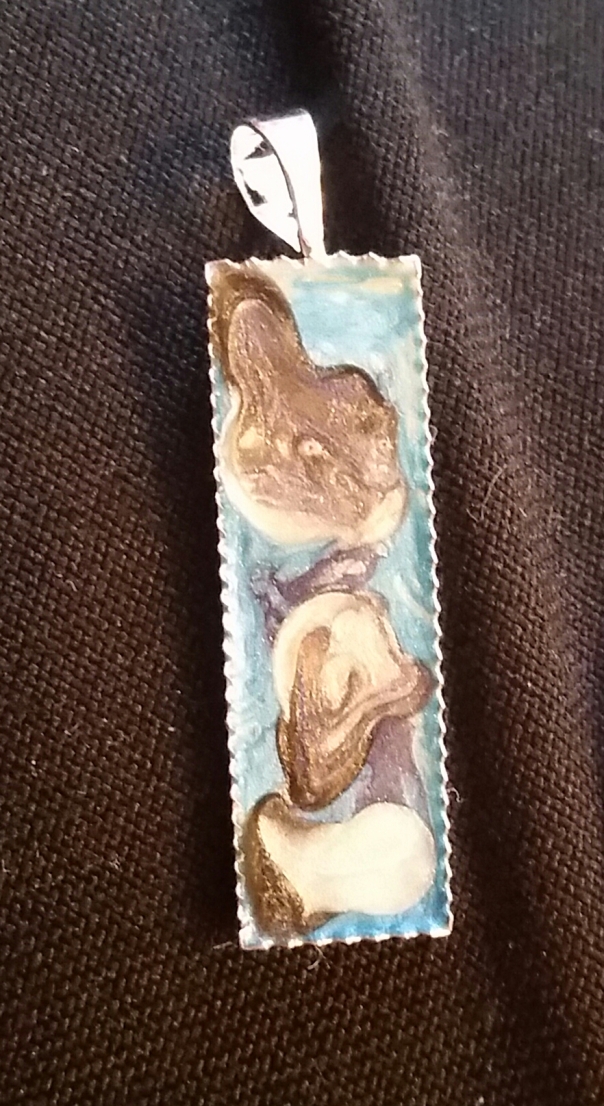 This one looks ok but not exactly what I wanted. It did confirm however that even when the moon has set the Prisme don’t do the Prisme effect if on them, or at least not in such small quantities.

This one however has set but is all bobbly in texture and looks very strange. So not 100% sure I am happy with this.

Ok back to the red one! Well before I got any further with this pendant it was called into action! And I decided for the moment it could stay as it was as when I wore it it no longer needed anything else!

As for the others that need a little work…. not had a chance to play with them again so will have to post another time!

I suspect, given this used such a small amount of paint, that there might be more bezels purchased and more of these lovelies will be made!  Friends may well be seeing these in their Christmas post!