My craft room had got VERY out of hand. And the parents visit was looming. These two things mean a major tidy up was required (my craft room is also the spare room where the parents stay!).

I thought I would document the process with my ProjectLife app. 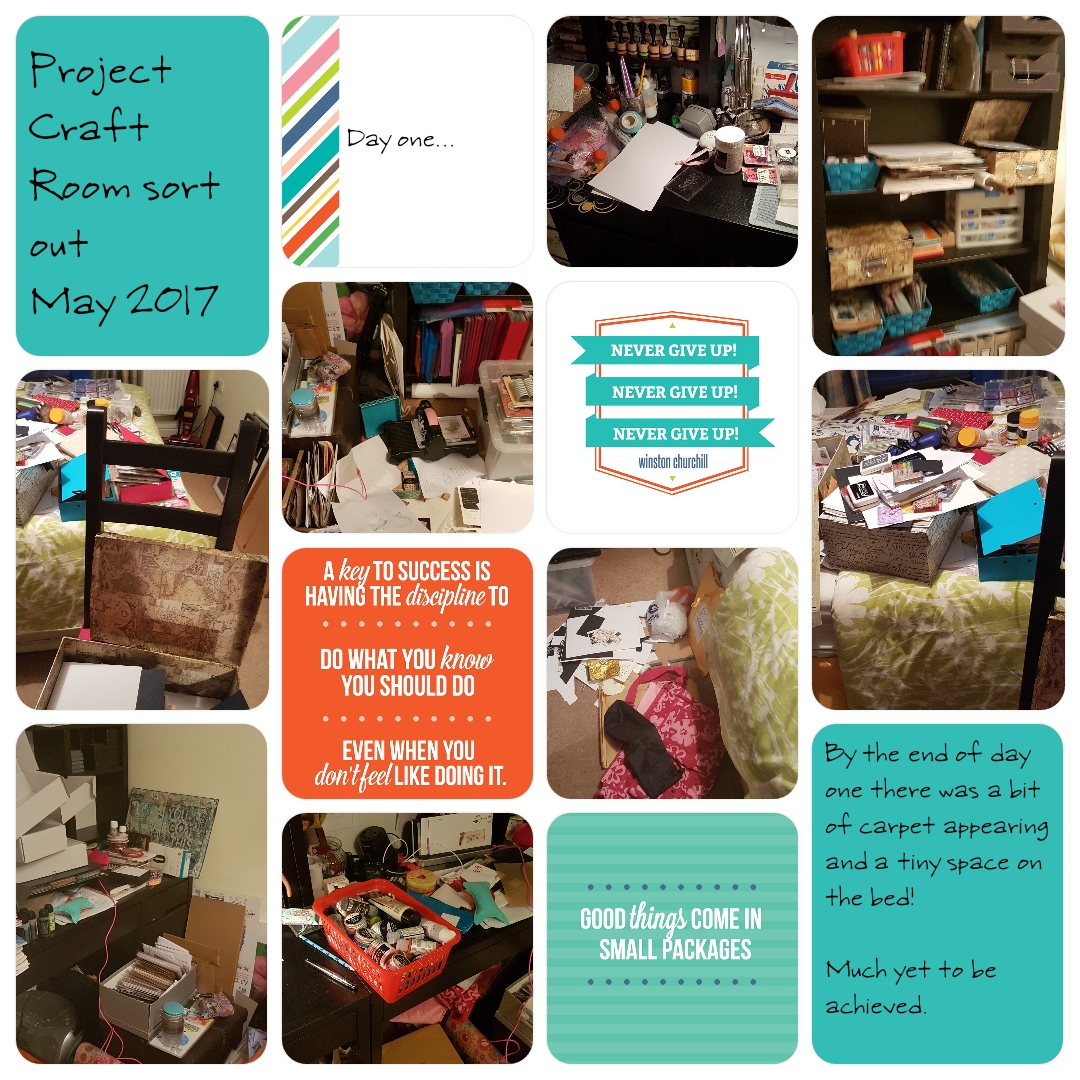 I did make a promise to myself not to create anything until it was sorted!

At this stage I did create a little something from the stash I found… I needed a notecard to go in a parcel I had put together for a friend. The piece of card with paint/ink on it was found in the mess. I added the stencilled feather with spray Dylusions and the quote I found in the stash too.  Just a couple of doodles and a nice little notecard.

Right back to it… 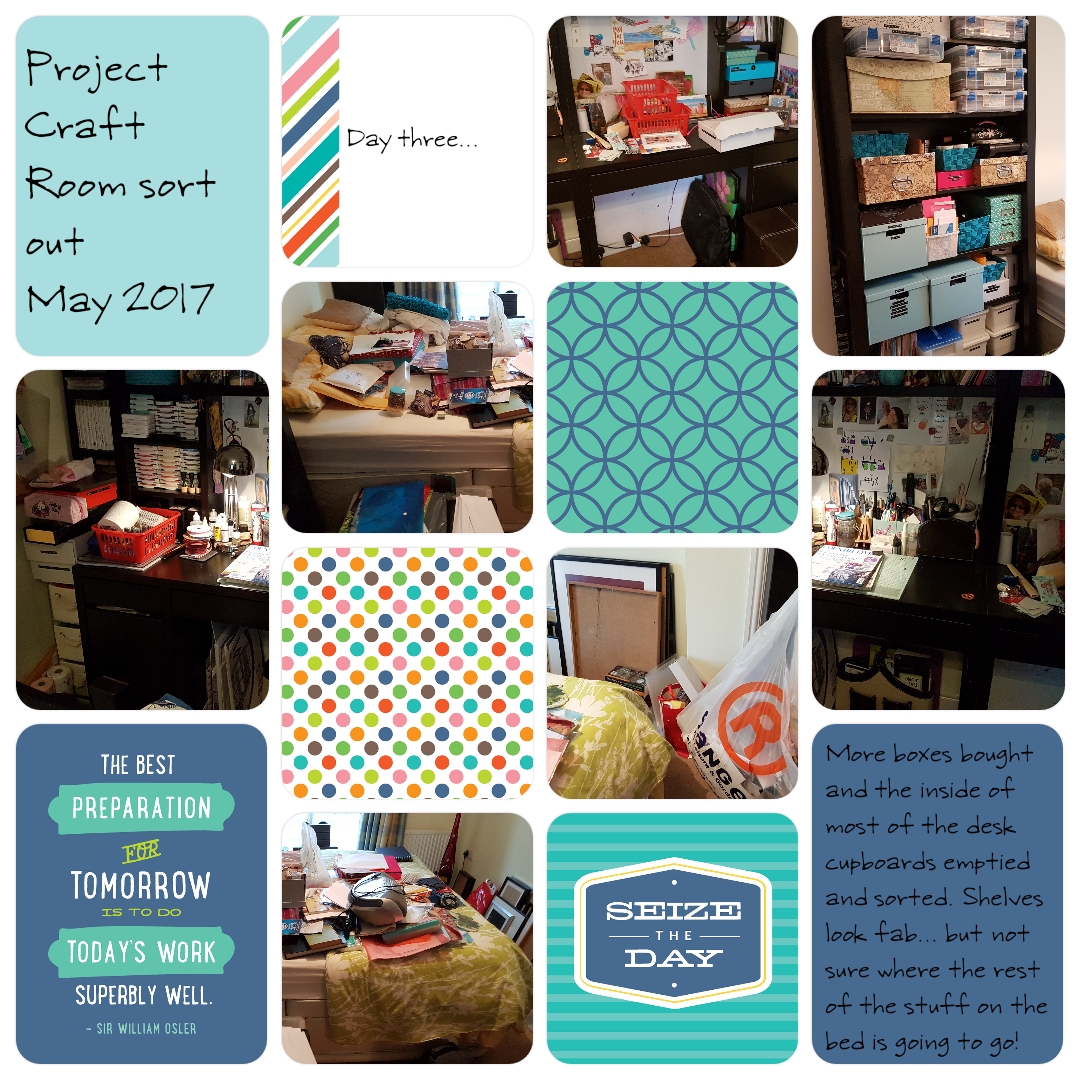 I spent the last hour of the time I spent in the craftroom cutting up an old atlas into usable sized papers.  Wow I know how to spend a Saturday night!!!

So the bed is clear and just needs some clean bedding putting on before the parents arrive and they should have some room to move around the room too!

Tonight my blog is craft and art free. It’s all about Strictly.

I am a massive Strictly come dancing fan and apply for tickets every year for every show in the hope that I get lucky. Once my friend got tickets so I went with her, and then last year I got tickets myself so the hubby and I went along for that.

Imagine my joy in finding out I got tickets again this year. And just when life was pretty miserable as it was just after my father in law passed away…. the perfect pick me up!

So on Friday the hubby and I set off after work and drove to Elstree. We stayed in the Holiday Inn hotel at Elstree and it was very nice. I had thought it was near the studios but it turned out that’s the Ibis hotel …. doh! So instead it was a 20 mins walk to the studios… not bad but considering I thought I had booked the one less than 5 mins walk … doh!

Saturday morning we were up early and heading to the studio to get our tickets validated. Unfortunately when you are offered tickets you are not guaranteed entry so you have to get there early to be guaranteed entry. How early? Well we joined the queue at 7.50am and they start validating tickets at 9am. We finally got ours done at 9.50am and we were tickets 305 and 306.  They say it’s 720 people in the studio… but I think around 200 of them are production tickets so I would reckon on 500 being the public at a guess. So I would suggest for people wanting to guarantee entry don’t turn up past 8.30am or you will get very nervous.

Anyway then you are sent away to do as you please till between 3 and 3.30pm. I think this time can change for each recording dependent on what they have to record. We got back at about 3.10pm and the queue was half what it had been that morning and was already progressing in through security. So quite quickly we were inside and handing our coats into the cloaks and getting my bag checked by security. No phones are allowed so people were handing them in to be collected later. We had left ours at the hotel as we knew there was no point in having them there just to get them taken off us again.

So now we were in a large holding area in a marquee. There were toilets and a bar and a photo booth thing (we didn’t bother queuing for that) and seats. Not enough seats for everyone but we happily got seats for us for the next stage of waiting.

Once the studio was ready for us, they then started feeding people into the studio in the number order that you had been validated. So you think maybe the earlier you are there the better the seat? Not necessarily the case. We were shepherded through to upstairs and had an amazing front row of the balcony view. It was brilliant.  Last year we had got there earlier and been a much lower number but were right at the back downstairs.  Definitely a better view for this time.

Once everyone was in…. that took a while… they then started filming with the music act. In our case Barry Gibb. Not my cup of tea but the man is a legend so happy to say I’ve seen a Bee Gee perform live! The dance that Janette and Giovanni performed was stunning. They did two takes for this and then off went Mr Gibb and his band.

Next Tess and Claudia came out. They filmed some links and then rehearsed the beginning.  And then it was time to start the live show.

Well that was amazing! Even the couples who didn’t dance brilliantly were still good to watch and the whole event was fabulous.  My hands and arms ached from clapping and my throat from cheering. It was so engaging and gorgeous to watch. The costumes, the music, the dancing and the personalities were all captivating.

Before we knew it the two hour show was over and whist the celebs and dancers mingled on the dance floor and with their friends and families we got the opportunity to pop to the loo and were given a kit kat and a drink of juice. Because we were upstairs standing up was not allowed so there was only limited stretching possible and by now we most definitely had a numb bum!

Eventually all the cast disappeared and they started setting up to film the results show. Unfortunately for us the stunning dance we watched on TV yesterday night was filmed the week before so no professional dance for us to watch. Then the results were announced.

Now I’m not going to get involved in the whole debacle of what then happened as I am not in the know of what went on backstage. What I do know is how upset both Anastacia and Brendan were and my heart went out to them both. Melvin was not as good in my opinion so was OK with him going. But the circumstances were unpleasant and also meant we had an extremely long wait as we were waiting for about 45 mins once the couples were announced till they came out and filmed the final part of the show.

Anyway enough about that… who were my favourites… well Kevin is a favourite of mine and I loved the Vienesse Waltz that he and Louise did. I also was blown away by the Vienesse Waltz that Danny and Oti performed. Ed Balls’ Charleston was fabulous and a revelation. I also enjoyed Giovanni and Laura’s Waltz and Alijaz and Daisy’s cha cha… I have to admit I didn’t really see Daisy dance though… I was rather focused on Alijaz’s rather fine bottom !!!

We finally left the studio on the Saturday at 11.15pm and headed back to the hotel, tired, hot, hungry and happy! It was a brilliant experience and one I would happily repeat (although preferably without the drama of this weekends results!).

And were we on the TV? Well yes we were. Not clear on this pic but the hubby and I were visible, if you knew where to look, on every wide shot of the studio. Whoop!

I just in front of the lady in red with the hubby to the right of me.

Do does this make me famous? Famous enough to be a celeb for next year’s series? Well we will see!

Here we are glammed up ready to go! We scrub up quite well!

Yes I have another two weeks of ICAD to share with you… and I am still loving it!

Sharing this now as my sleep pattern is all upside down as a result of toothache and dentistry treatment!  Ah well!  Late night blogging it is!

Love the variety of styles I am trying out and the way the prompts take me in some unexpected directions!
Happy crafting!

Yes another week of ICAD has passed so here is week 2 round up using the fab Project Life app to put it together prettily!

Particularly loved getting to use my favourite stamp on the Playground one.

Wonder what next week’s will bring?

So whilst I have not really been able to get in the craft room I have still been creating… following #ICAD2016.  So here are the first weeks cards… using the lovely #projectlifeapp to put it all together.

Particularly loved the snoopy and the typewriter cards but mainly just been loving grabbing a daily moment to create.

On the last day of February, the Project Life App was released on Android.  I already had it for my ipad but as all my pictures are taken on my android phone I never used it.  I decided that I would give it a try at the beginning of March and I ended up using it everyday, even if I didn’t take pictures.

It has helped me to note the things that happened each day, how my mood was, take notice of achievements and teamed with using the hash tag #happythings on Instagram feel grateful for my life.  It coincided with me returning to work after a period of sick leave and has really helped.

Not sure if daily use will continue but I love the fact I managed a month of using the app on a daily basis and creating a record of life for a month.  Here is a quick run down of the pages I created. 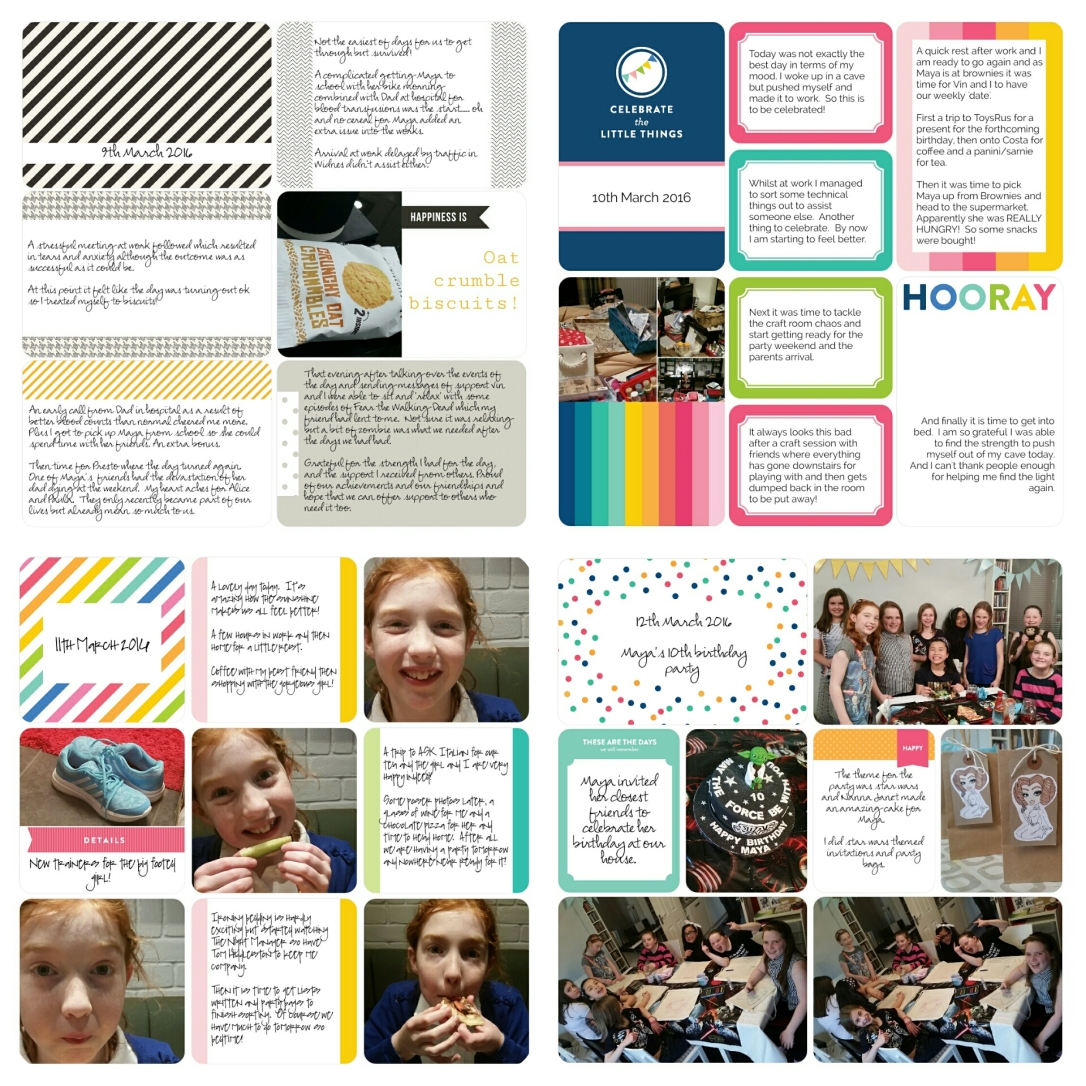 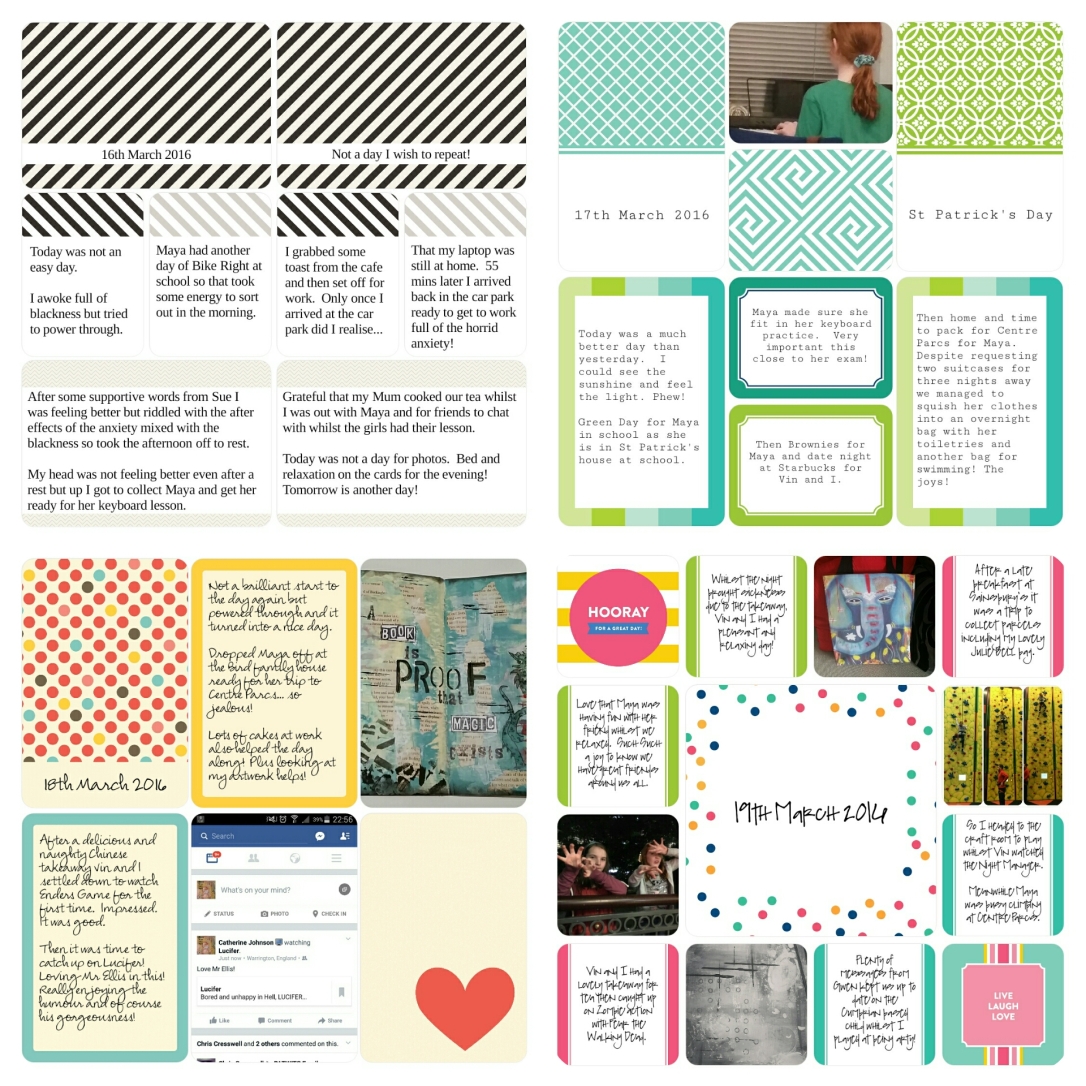 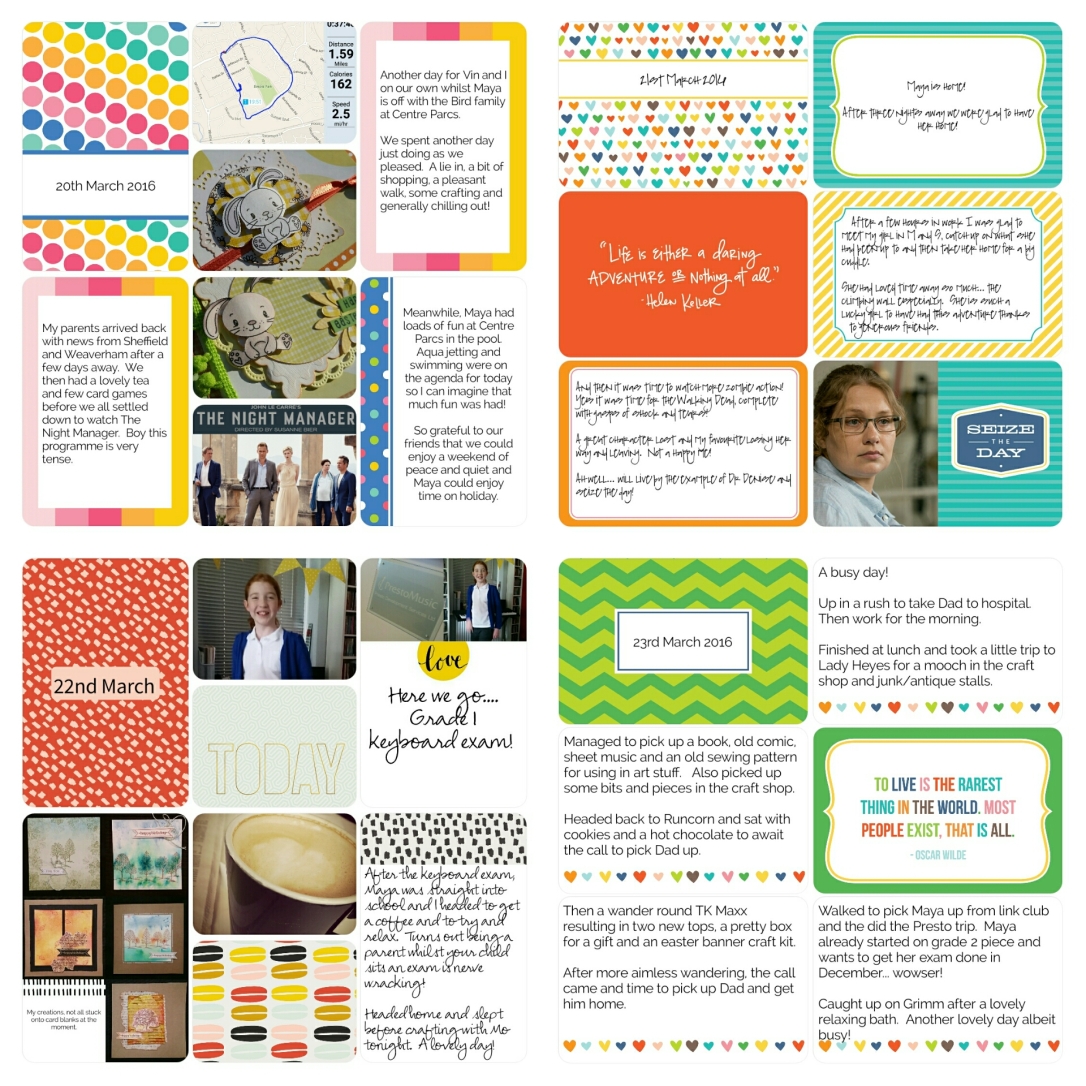 Didn’t always represent good or the positive times but did try to be positive in my reflection even when acknowledging the things that weren’t good. I think that is important to note.

Have you tried a scrapping app before? I’ve done digi scrapping and I’ve made real pocket page layouts but decided I didn’t want to do the project life … I decided that it wasn’t for me… but this is such an easy app to use and not too pricey to get kits etc. So think it might be something I will use for a while to come!

It will be interesting to see if the print element ever works in the UK too… In the meantime if I ever feel the need to print them I guess saving them as pictures will be the way forward!