Used some more of that fabulous bright fun paper in the latest Making Cards magazine to create some cards.

First I took an image and partially die cut this and then added layers of both mirror card and embossed vellum underneath at funky angles.

I added Wink of Stella and some glossy accents to the image to bring them to life and add texture. Of course I also added some sequins.

Next up one of the little flying unicorn images…

More mirror card and some white card to mat the main image.

Again out came wink of Stella and glossy accents to add the extra sparkle.

Again I love these cute and cheerful cards.

So this year I have decided to challenge myself to make a set of cards, scrapbook page or journal layout using each of my stamp sets as I know I have some I rarely use!

Thought it was time to share this page in my journal.  This time a double spread I worked on over the last few weeks.

The starting point shown above was using the Dictionary stamp with Watering can archival in random sections.  This is not the most exciting start to a page but rather than work on a blank page it just helps to have something there to start with and a text stamp like this is perfect for creating something on the spread… a nice first layer.

I decided to start this page with distress inks as I wanted to see the quality of the paper taking the inks in the Dylusions journal. I used Fossilised Amber, Abandoned Coral, Spiced Marmalade and Fired Brick and used the blending tool to blend the colours till the pages were covered. Then I made a mask from some paper to make a starburst effect and sprayed water. It worked slightly better on the right from the left… but it is barely visible.

Next I took a stripes stencil and added some more Fired Brick through it in a few areas. Then I used the Matt Gel Medium through a Paperartsy stencil. It’s difficult to see that in the photo above… Here is a close up…

Again not the easiest thing to see but still adds another layer of interest to the final piece.

Next I added the a dictionary stamping again. This time using the fired brick distress ink. I then put a stencil over the page and added water through to take some colour away. This is the lighter dots. I also added some sticker trim which has a plastic feeling to the finish which means it resists ink etc, but it was ok with some of the paints I added later.

I then grabbed the Alphabet embossing folder, added some seedless preserve ink to it and a spritz of water and used it as a stamp in some random areas. Then decided it was time to go back to the Dictionary stamp and emboss. I chose white detail powder but it also had a bit of frantage mixed in with it so there are some gold bits too. 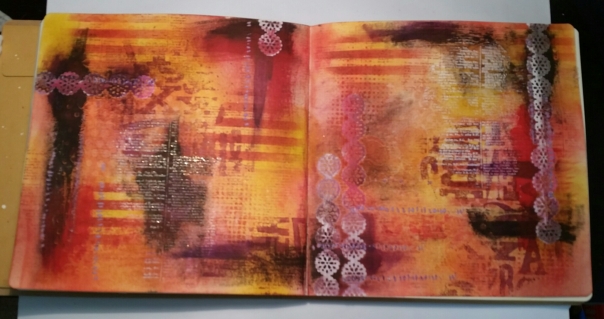 Next it was time to add paint. I used a deep purple and some dark red to add some darker sections on the page and rubbed paint off the embossing and some of the sticker trim to ensure some white still shows through.

I decided I wanted to try an image transfer using a photograph I found that I think is of my grandfather with his parents and siblings but could be wrong. I scanned the copy of the picture I have (not brilliant quality I have to admit) and then printed it onto acetate. Then I tried on both Tyvek and Canvas the satin glaze transfer technique Darcy had taught us in Edinburgh and I hadn’t really done a brilliant job of it.

Neither came out well (this is the canvas one in the process). Both came out very patchy. But as I don’t have a huge amount of acetate in the stash decided to go with the Tyvek one layered on the canvas.

I coloured the canvas piece with distress stain in Fossilised Amber and Spiced Marmalade and also did a few other strips of the canvas in the same. I also grabbed a small piece of scrap paper and ripped it into strips to collage onto the pages too.

Of course I was so busy creating I forgot photos at this point. I wanted to add more of the Frantage so I added that in little puddles randomly round the page. Heating it was a bit of a hilarious affair though as it wasn’t really adhered and blew everywhere resulting in a big clean up job for me…. again!

Next I added a little bit of Pitt pen in brown to the edges of the paper and the Tyvek. I love how the Tyvek curled as it was heated when the frantage was melting.

I added some journalling using a black pen and found three stickers in the Tim Holtz Chit chat set that worked as my title. 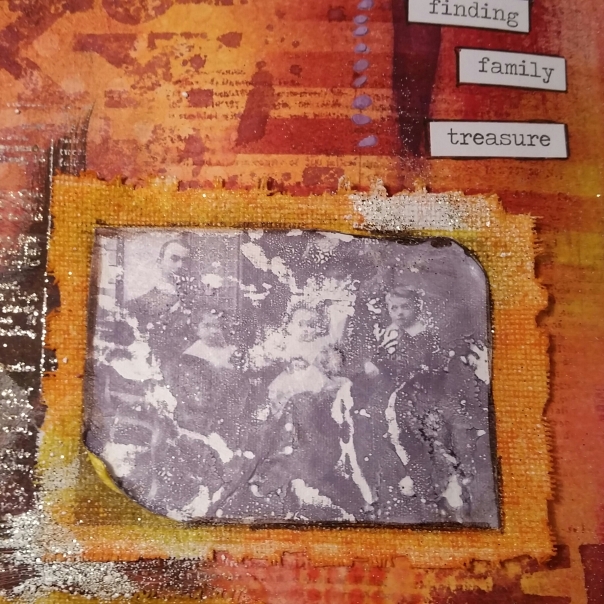 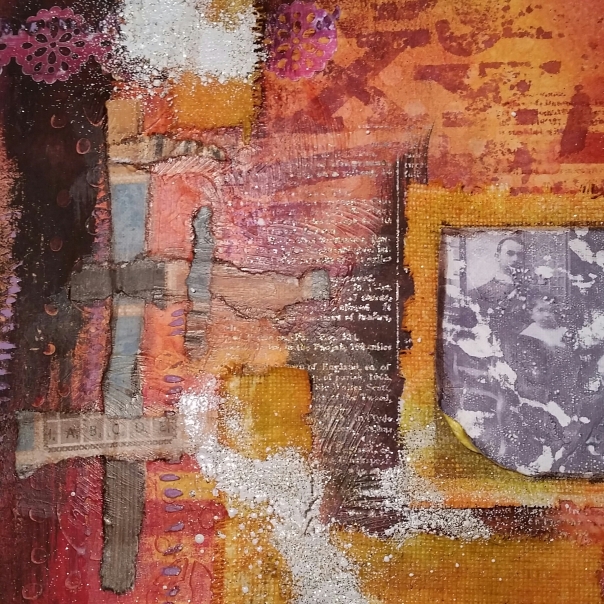 I love all the texture and colour on this page and how it came out. I would have preferred a better transfer for the image but it worked well enough for the page… After all this is just for me.

Hope you like this. I can’t see me getting rid of the Dictionary stamp. It’s just too useful as a background stamp.

Quite possibly my longest blog post title ever!  Just not sure how to describe the technique that tonight’s art journalling class are doing… So going for the say what we are doing kind of title!  He he!

So tonight, friends descend on my family room and I show them a mixed media technique or product and some pages I have done, and then they get to play.  It’s not exactly teaching … But they learn and I learn and we all have fun!

This time I have three samples for them to look at and hopefully be inspired by… All were done using the same techniques.  It sort of became a use Distress inks different ways kind of thing!

The idea is that you use embossing folders to stamp the ink onto the page, and as you have spritzed them with water before “stamping” they give a watercolour effect.  You add different colours to the folder in patches, and the distress inks blend nicely to give tonal effect.  You can use more than one embossing folder onto one panel and as they are generally transparent you can see where they need to go.

Next step for the backgrounds is adding distress ink with cut and foam, or a distress tool.  This gives a nice blended edge.

Then, I did a full blended piece of cardstock as a panel too, to show how the colours blend and create different colours.  The figures are then using magazines for create an outline, and then turning it into a silhouette.  No need for buying a stencil and being stuck with the one body shape.

I also added some stamped embellishments for the first two … Hearts that are ones that clever Darcy designed from her first sets of stamps… I adore these stamps!

Oh and the titles/sentiments for the pages … All created in different ways.

One of my friends at work has recently had a gorgeous baby girl, Josslyn.  She also admired the card in a box I made for my cousins little boy.  So I thought as a little treat for her first trip into work with baby Josslyn (that I unfortunately had to miss as had meetings out of the building that day) I would make a card for her to open!

Here is the starting point…

Using Strawberry slush, Crisp Canteloupe and Bermuda Bay inks I stamped using the embossing folders the backgrounds in a technique I will be teaching at the next art journalling session.  Creates such a cool effect.  These were then added to the constructed box.

Next I stamped and cut out lots of cute embellishments.  Heart based things from Language of love, little bunting banners from Henry Says, and the animals from a retired set called Animal Stories.  I kept to the same colour scheme for everything, strawberry slush, crisp Canteloupe, lost lagoon, Bermuda bay.  I didn’t want it to be pastels as such, but more bright pastels as they seem more Mish and Jody’s style!

Next I started decorating the box… Here are the sides…

I added sentiments from a couple of different sets I have got.

Then the front from slightly different angles…

﻿Really pleased with how this came out.  Cute but funky at the same time!

Fingers crossed next time Josslyn comes to visit work I will be there to say hello in person and dole out many cuddles!

Yes it’s back! Not just because I didn’t quite finish the SU colours … I’ve got two left to look at … But also because I enjoyed this approach to looking at the colour and using that as the inspiration point! So thought I would start on the Distress inks as well to go through those (I don’t own as many!) and then see where I get to!

But first things first let’s finish off my SU colours for now! Of course there will be new In Colors later in the year too, but I have one bright and beautiful colour to showcase this week…

I can’t quite believe I haven’t done this before now as I love this colour and use it a lot… Or at least I thought I did, but maybe I haven’t used it as much as I thought!

I started with a small panel of whisper white cardstock and the Alphabet embossing folder. I inked up the folder before running it through the Big Shot, this created a lovely effect on the paper. I mounted this onto Tempting Turquoise cardstock. I then created a topper of one of the fabulous steampunk houses Darcy created for Paperartsy … Isn’t it fab? I coloured it with my Spectrum Noir pencils to create the shading and fab colours. I fussy cut it out and then mounted it on dimensionals to give more dimension to the card.

Next I created the little sentiment topper, using a Ciao Baby stamped frame, and the little punch that coordinates. Then I stamped some little alpha stamps into the New Home sections which I cut out. I added the bakers twine, sentiment topper and pearl gem and then affixed the whole panel to the card blank.

Love how this looks, funky, and fun! Perfect as a new home card!