For Christmas I gave my parents and my auntie a calendar I had made with a postcard sized piece of art on each month… so today I am sharing their May artwork.

For May I played with alcohol ink and Finnabair stamps.

Love the vibrant colour and the touches of silver in the backgrounds and then the embossed circles and the black butterflies.

Slightly different size for these too as the glossy cardstock is precut to 5.5 x 4.25 inches rather than 6 x 4 like the other panels.

This month’s inchies I used up a random gelli print as the background and mounted it onto the mountboard and then cut it into the 1″ squares.

Next I stamped and embossed with the Seth Apter Patina Oxide embossing powder a text circle from Finnabair. I then decided to edge all of them with the same powder.

Then I needed a bright contrast for the focal and chose to punch the butterflies from paper and spray it with Distress stain in picked raspberry. Then I stamped using distress oxides on the top and this gave a variance in the colour and on some the text is visible (but not on all). I mounted them and added a gem to finish off.

Love these grungey and funky inchies.

Time to make a start on the swaps for June… I had an ahead start on this as the background was done when I did a gelli printing session a few weeks ago… I printed onto book print which left a resist of the writing on the gelliplate that I then pulled off on the tag… although upside down! Lol!

Anyway I kept it pretty simple with the Tim Holtz wildflowers stamp and a Finnabair sentiment. For finishing touches I added some enamel accents and bakers twine.

Love how simple this was but equally stunning with that gelli print happy accident as the background.

On Sunday I treated myself to a few hours of play in my art journal… here is the result.

I videoed the process which you can check out on YouTube. It really wasn’t going to plan at one point with the page disintegrating but I pulled it back from the brink and happy with the results. Love the bright colours and fun textures I achieved and most of all enjoyed playing with paint and paper.

Hi there. Sorry I have been AWOL for the past few days. After our trip away and the wedding weekend I’ve not really stopped and made room for crafting… but today that changed and I’ve spent most of the day being creative. It’s been fab!

I started by catching up on some of the #52playingcardchallenge I’ve been doing this year… I had 4 weeks to catch up on. So over the course of a few hours I managed to get 4 cards made.

I videoed the process so here is the link.

I love how different they all are and am especially in love with the cow one! Love the Teesha Moore style of this.

Here is a video of the process behind making the card I am sharing today.  I hope you enjoy it!

Yes it is finally a none Christmas related post… it is mixed media art journaling time! And boy has it been a while since I did a page in my journal just for me!

This is the full spread… And here are some close ups… 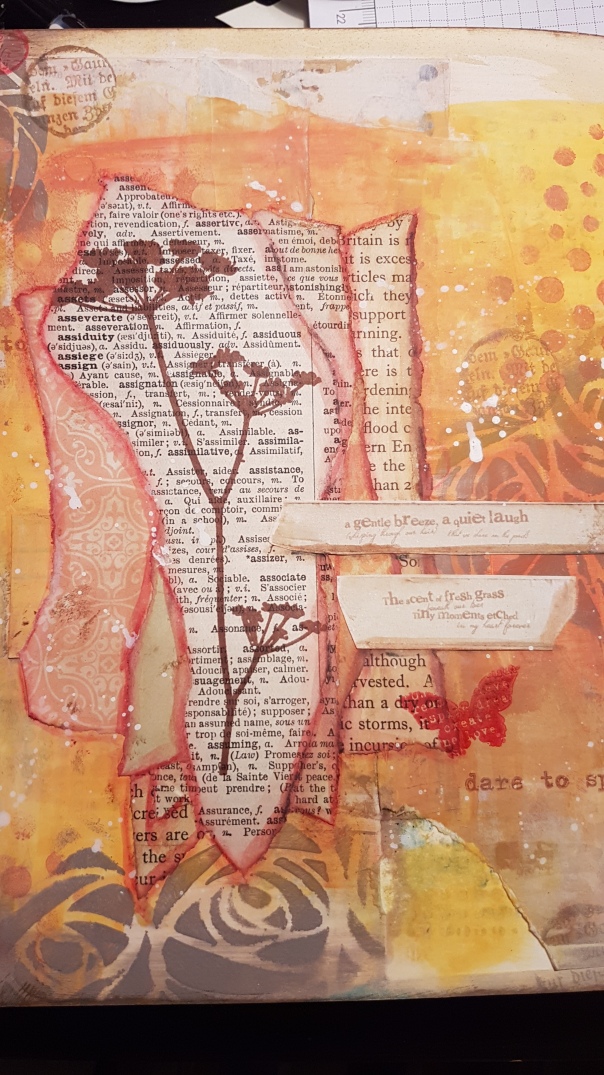 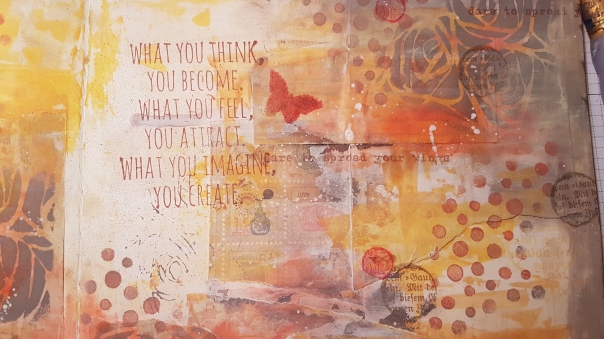 I love these warm colours and all of the texture and pattern from using the pieces of patterned paper.

Tonight some friends are popping over to mine to make some cards using a masterboard as the basis.

Here is the masterboard I created for the basis of the samples.

I used Paperartsy fresco finish paints and a mixture of stencils and stamps.

Here are the samples … but obviously the end products may be very different due to the unique nature of creating a masterboard.

Card one I used Kim Dellow stamps to create the flowers and added a doily to separate the bright blooms from the background. In all except one card the feature image is watercoloured using SU inks and a waterbrush.

Card two uses the finnabair stamp to add the feature stamped onto the same yellow cardstock as the mount to the panel and sentiment.

Card three I decided to jazz up the panel by die cutting a section out. I also added some shimmer ink on top of the watercoloured presents to add some additional shine. 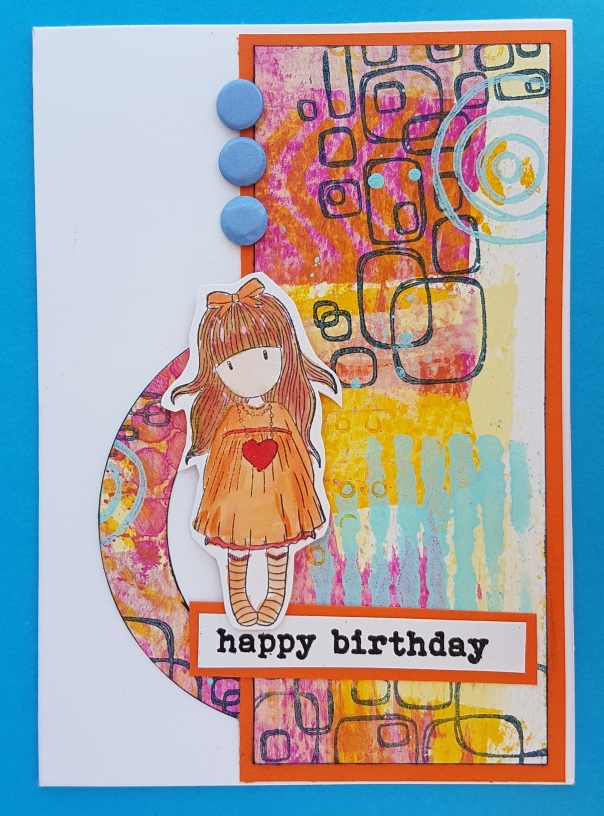 Card four uses the cut out from card three to add interest behind the Gorjuss Girl image.

All in all a fun set of cards made with one piece of 6 x 12 cardstock for the masterboard.

Love this method of making cards.

So today I have a mammoth 12 ATCs to share that I made for a swap with the theme of Mixed Media! Of course I can’t make 12 all the same so I decided instead to go with six pairs.

So I cut some mixed media cardstock into six panels of 5 x 3.5 inches and then added either tissue paper, sewing pattern paper or wallpaper to each of them and added some gesso too.

This gave me the following six panels to work with… 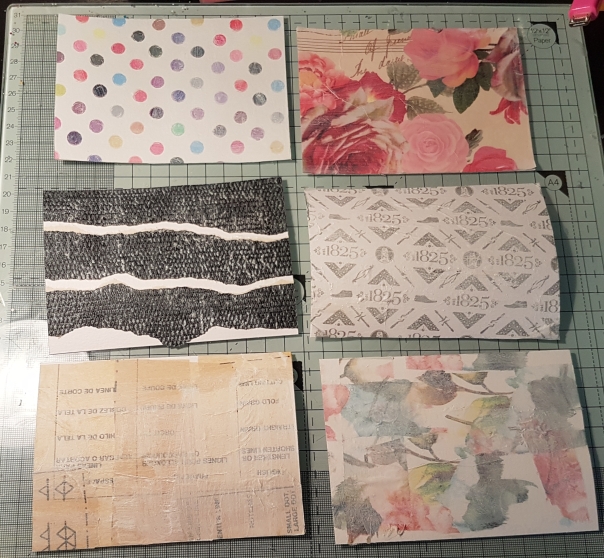 I then worked on each of them at a time adding colour and texture.

This first one was the floral tissue paper that had come on an artful days goodie box and I added distress crayons over the gesso.

I then added some stamping using the badass chick stamps and a piece of the textured wallpaper in the centre. I then mixed some modelling paste with distress crayon and added it to the card through a stencil. 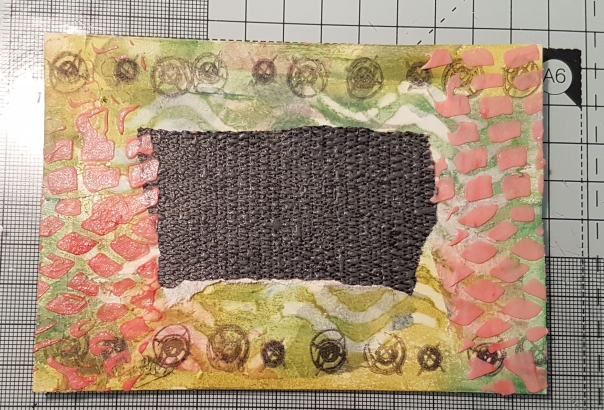 I left that to dry and moved onto the next card. This one had the sewing pattern paper on it. I added some book print and then distress stains. I love the different vibrancy as a result of the gesso and non gesso papers.  I then got out the sewing machine to add some stitching for extra texture. 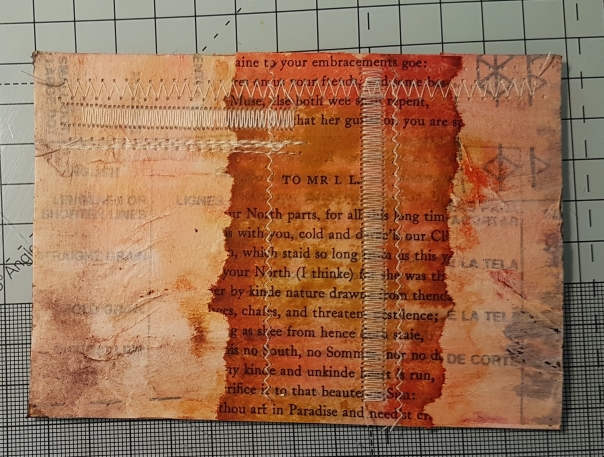 The next one was tissue paper from a shoe box which had some pattern and some numbers on it.  I added blue gelatos to colour and then heat embossed the stars with white powder. Then I added pieces of a blue doily and some sequin waste using some blue staples. Finally I added some book print it had added colour to using distress oxides. 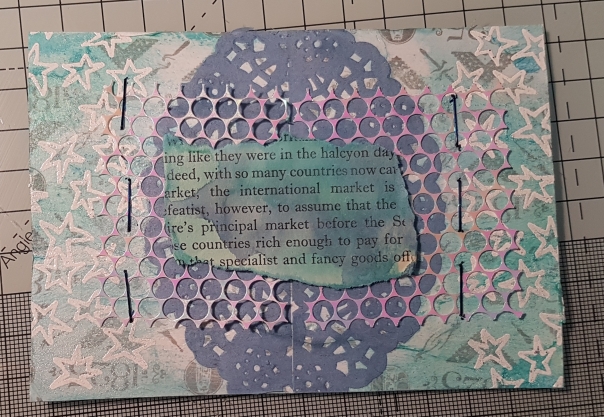 Right onto the next one…

This was some floral vintage style tissue paper. I added some red card that I had impressed a brickwork die onto but by the time I had added gesso over the top and Matte medium this had pretty mich disappeared. I then added some more colour using gelatos and then through a stencil I added some of the art alchemy paint in a pale pink colour.  Finally I added two strips of wax paper that I used the sewing machine to adhere to the panel.

Next I had a bit of a heat him issue with! But still I love it!

I used some spotty tissue paper on this and after a very light coat of gesso I added some transparent glossy texture paste through a circles stencil.

This once dry added a lovely resist so then I added distress stain in blues and greens but when impatient for them to dry I took my heat tool to speed things up forgetting that the texture paste doesn’t play with heat so ended up making a bit of a mess of the circles which meant the ink did seem into them. Ah Well! Never mind. To add to the circle theme I wiped some of the ink away through another stencil and then added the Finnabair circle stamps.

Final one… I had added the textured wallpaper to this one in torn strips. I used the Paperartsy fresco finish paints to add the colour and then used the Art alchemy sparks paint to paint a piece of watercolour paper that I then die cut using a Tim Holtz die. After adhering this I added some text stamping using the Gummipan stamp. 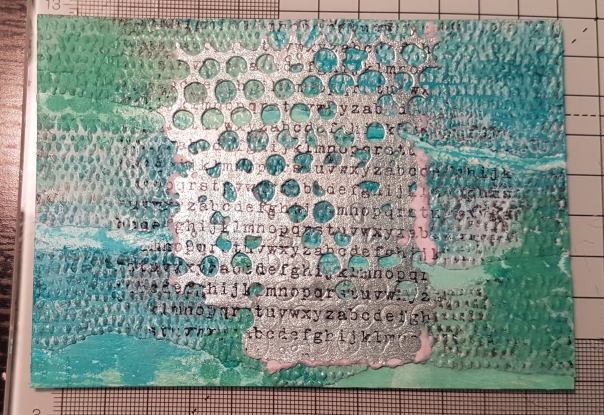 So these were my six panels ready to make into ATCs.  I took each panel and trimmed it to size and then started adding the rest of the pieces on to turn them into mini artworks. I used a mixture of stamps and embellishments to do this.  And this is where they all got organised and adhered. Particularly like the Craft stamper Magazine star that Kim Dellow designed. And I hadn’t used the Clarity tangled heart in a long time!

Then it was time to finish each piece off.

The first panel I added the Badass chicks girl head stamp and gave her a body from book print. I coloured her with distress crayons and then added stickles to one set of the flowers and glossy accents to the other.  I then chose some sentiments for the titles.

The next one I added some diecuts from craft foam and one of the stamped girls from the Stampin Up Beautiful You set.  I also added a sentiment for each. Then on one I chose to add the glitter flakes and the other got a button.

I think this next set might be my favourite. I added some navy thread behind the stars that I stamped in distress oxide and heat embossed with clear powder. I then added some spots of glitter and on one of them I also added some tiny star sequins. I then added the sentiments.

I didn’t add much to these except two Gorjuss girls and Tim Holtz sentiment stickers.

I ended up adding some netting to these next ones and some more sewing. Then I added the star stamp which again was stamped with distress oxide and heat embossed.  I then added the gems from the artful days goodie box.  Then on the one on the left I added some of the blue stars and some glitter glue.

And the final set… I heat embossed the heart and then added distress oxides.

So happy with all of these and how I managed to make them all different!

As with previous months I joined in the swap Lindsay Mason organises. This month’s theme was Transformation. I knew a butterfly would have to feature on my cards.

I started with some map book paper and scraped some gesso over it. I then added distress inks. 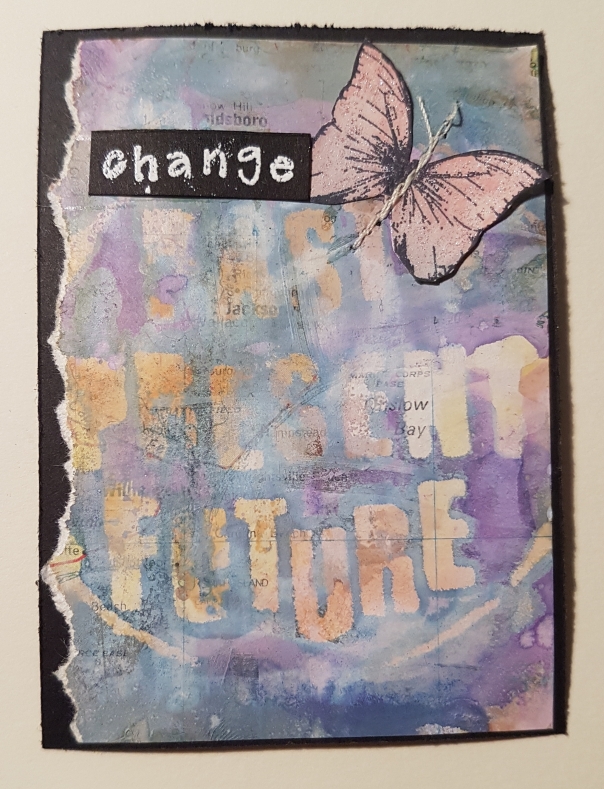 Once I was happy with the base colour I added distress micro glaze through a Seth Apter stencil and then added more layers of the contrasting colour over the top. This gave a fab effect for the background.

I then stamped the finnabair butterflies onto white cardstock and added some ink lightly over the top and cut them out. I then sewed them into place and then ripped one edge of the background as I like the jagged edge when mounted onto the black.

I then stamped the title of ‘change’ in versamark and heat embossed in white and added that to the card too.

I then made another atc from bits left on my desk and made it into a little notecard for Lindsay. 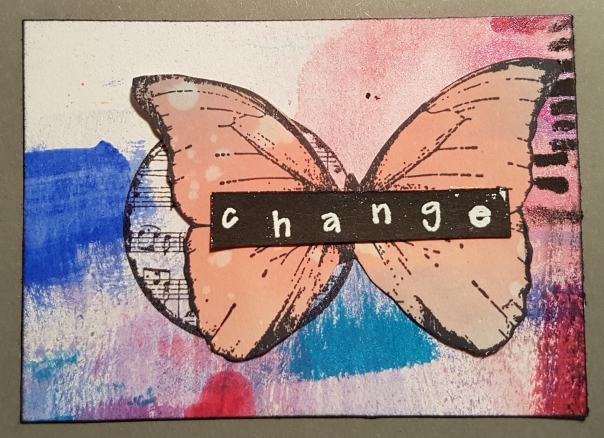 Loved this theme and loved trying out a new technique with the microglaze. Will have to try that one again!